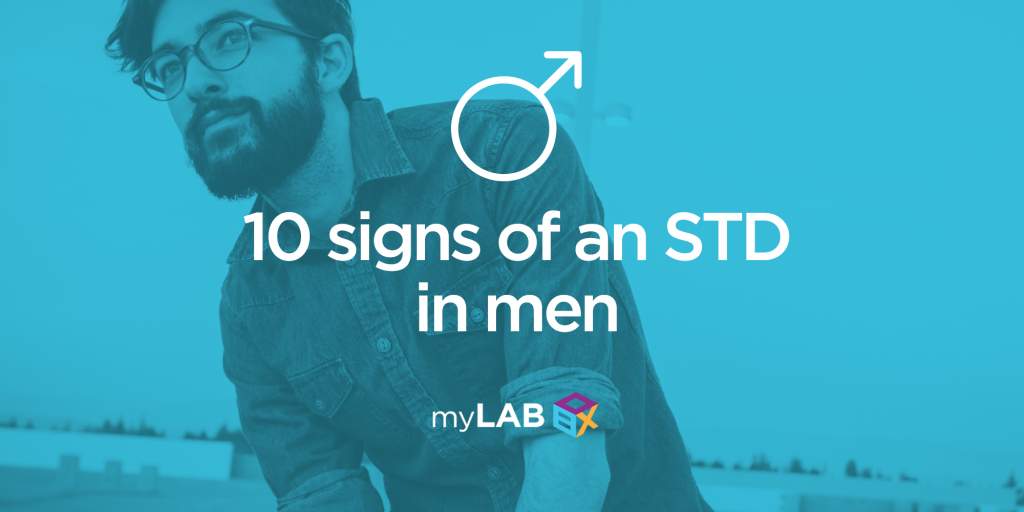 If you are in the 20% of men with STDs experiencing symptoms, knowing what to look out for can help you catch, diagnose and treat STDs early!

The worrisome side of sexually transmitted diseases is that many people don’t know they are infected because they never experience symptoms. 80% of people who have an STD don’t show any symptoms, which means that they are unlikely to test and end up spreading the infection to others. If you are sexually active, you need to be tested regularly, regardless of your gender, age or sexual orientation.

The Top 10 STD Symptoms in Men include:

1. Discomfort or burning sensation after urination

This symptom accompanies a variety of STDs from trich to the clap, and Mycoplasma genitalium.[1] Burning or discomfort after urination is one of the most common signs of an STD in men.[2][3]

2. Discharge from the penis

A green or yellow discharge is another common sign of an infection.[4][5] This is why you may hear gonorrhea referred to as ‘the drip’.

Think you’re hitting the bathroom more than usual? Maybe you’re waking up frequently in the night to relieve yourself. This could be a sign of chlamydia or gonorrhea.[1][2]

This might just be a sign you need to give your equipment a break. However, this symptom can also accompany a variety of STDs.[6]

5. Itching inside the penis

This symptom is common to trichomoniasis, jock itch, as well as yeast infections in men.

7. Discomfort during intercourse or a burning sensation when ejaculating

If you’re experiencing some unpleasantness when doing the deed (or as you’re crossing the finish line), this could indicate an infection.[3]

This one surprises many people and is often dismissed as a cold or flu symptom. Don’t just buy some lozenges and shrug off that sore throat if you’re experiencing this symptom within days of going down on your partner.[9]

This sounds like the aches and pains that come with the flu, but these are also signs of Hepatitis C or HIV.[10]

10. Blisters, warts, sores around the penis, groin and rectum

This one might seem obvious, but these signs accompany herpes[11][12] and syphilis.[13] Don’t panic. It’s common. While it isn’t curable, it’s absolutely treatable.

The absence of evidence isn’t evidence of absence

It’s important to remember that sometimes the early signs of an STD in men can be very mild. You may not experience any symptoms at all. It’s important to know what to look for, as well as the incubation and testing timeframes for the most common STDs. If you’re sexually active, with or without symptoms, it’s time to get tested.

Signs That Men Should Get Tested For HIV

It’s the early stages (acute HIV) that most men experience flu-like symptoms a few weeks after they are infected. Below are examples of some of the symptoms men may initially experience. If you think you may be infected, take an HIV test right away.

There are typically three stages in the virus’s progression in the body. These stages include:

Advanced infection: During this period, a carrier’s immune system is severely weakened, making their bodies susceptible to illness. At this stage, even everyday health concerns like a cold can become life threatening. This is because the body doesn’t have the resources it needs to combat them.

Don’t wait, order one of our FDA approved, at home STD testing kits.

Who is In More Danger? Men or Women?

That’s sort of an unfair question. Most sexually transmitted infections and diseases can affect men and women differently. Men tend to suffer from fewer complications than women.  For example, Sexually Transmitted Infections (STIs) can cause significant consequences related to pregnancy. Women must take extra precautions to avoid passing infections to their children. That doesn’t mean that men are completely off the hook though! STIs are nondiscriminatory. They affect both men and women, and everyone should get tested regardless of gender assignment.

STIs are an ever-present problem in the United States. Sexually transmitted disease and infection rates are on the rise. According to the Center for Disease Control (CDC), cases of gonorrhea, chlamydia, and syphilis have all shown substantial increases since 2014. HIV is on the rise as well!