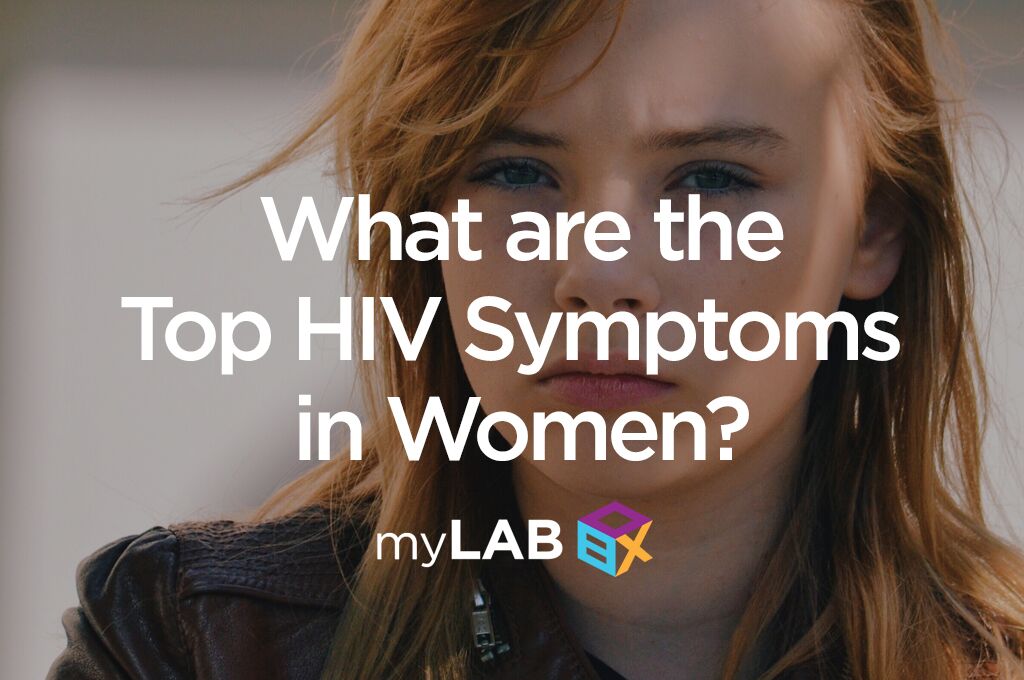 Over one million Americans are living with HIV.[1] Not only that, but HIV can affect anyone, regardless of race, gender, or sexual orientation. With that said, women accounted for 19% of all HIV diagnoses in the United States.[1]

It is important to recognize early HIV symptoms in women. The earlier you get tested and can begin treatment, the better. HIV (human immunodeficiency virus) is an incurable virus that weakens your immune system and is spread through some bodily fluids like semen and blood. HIV can also spread from mother to child during pregnancy, birth, or breastfeeding. When left untreated, it can cause health complications and develop into AIDS (acquired immunodeficiency syndrome), a disease that leaves you at risk of getting an increasing number of severe illnesses.

There are also some specific HIV symptoms in women that would not affect men, including:

According to the CDC, 87% of HIV diagnoses in women are due to sex

with someone who was infected with the virus. The other 13% of infections were due to

intravenous drug use. Now you know a bit more about the three stages of HIV that affect men and women. Let’s talk about the early HIV Symptoms in women.

Common HIV symptoms in women include:

One of the most common HIV symptoms in women is having an irregular period, which could cause changes in bleeding, discharge, or PMS symptoms. Additionally, many HIV-positive women experience pain in their upper belly or during sex.

Since the virus also increases the body’s susceptibility to other sexually-transmitted infections, infertility is a high risk for women with HIV.

Seeking treatment as soon as possible is the best course of action, so getting tested often is crucial for anyone who is sexually active or may otherwise contract HIV.

Phases of HIV in Women

In general, the HIV infection follows a similar pattern in men and women. These often show in three stages:[4]

It may take a couple of weeks for HIV Symptoms in Women to become visible during this initial phase. For 80% of infected people, the first symptoms appear within two-to-four weeks and often resemble the flu.[5]

These symptoms may include:

Of course, that’s assuming the symptoms are even visible at all. Many people with HIV may not see symptoms for several years. The only way to truly know for sure whether or not you have HIV is to get tested.

Once the first phase ends, the initial symptoms will completely disappear. During this seemingly dormant stage, the virus is actually replicating within your body. Though you don’t feel sick, the virus is still actively weakening your immune system.

This deceptive nature of HIV is a key reason why regular STD testing is imperative.

During the last stage of the infection, your immune system is severely damaged. Standard “run of the mill” illnesses can now become life threatening. With a weakened immune system, you may notice that you frequently get colds, flus, and fungal infections and have a harder time fighting them off.

If you’ve detected the infection by this point, treatment will greatly improve your ability to live a normal lifestyle.[6]

During this stage, you might experience the following AIDS symptoms:

In addition, HIV poses a greater risk for women who are pregnant.  In these cases, HIV can cause other complications. For instance, the virus may be passed onto a pregnant woman’s unborn child. An infected mother can also spread HIV to her baby through breastfeeding. With treatment, these risks can be minimized or eliminated. To be clear, an HIV-positive woman can still give birth to a healthy HIV-negative child with the proper treatment prior to delivery.

Using a condom during any sex act should be your first line of defense against HIV and other sexually transmitted infections and diseases. As we all know, condoms aren’t perfect.  Fortunately, if you are HIV negative, a daily Pre-exposure prophylaxis (PreP) pill is another way to prevent the spread of HIV. When taken properly, this pill can significantly reduce your risk of contracting HIV. Often, it is taken by people who are in a relationship with someone who is HIV-positive or at high risk of contracting HIV. You can learn more about PrEP and HIV in our previous article on the topic.

Once past the asymptomatic period, HIV symptoms in women can be fast-acting and dangerous if left alone. Regardless of your income or current state of health, there are many reasons to take an at-home HIV test as soon as possible.

While medical laws prevent providers from sharing your information without consent, that doesn’t protect you from running into your boss or friend at the doctor’s office. Testing yourself at home allows you to maintain your privacy, saving you possible embarrassment or anxiety in the waiting room.

Understandably, many women forgo professional testing as a result of nerves or stigma associated with HIV and STDs. As a solution, ordering a self-administered test can take the headache out of the entire process.

Taking an at-home test is the easiest – and most discreet – way to get a head start on treating HIV symptoms in women.

Even if you’re fortunate enough to have insurance, you could still face high fees and premium increases by getting an in-house HIV test.

Getting tested at the doctor’s office also gives them the ability to use that data to increase your insurance premium, which could affect your coverage options later on.

At-home HIV tests are confidential, affordable, and unrelated to your insurance plan, income, or financial situation. You simply need to order the test of your choice and wait.

HIV stands for human immunodeficiency virus. This is the infamous virus that can lead to acquired immunodeficiency syndrome, or AIDS. HIV attacks the body’s immune system, damaging the carrier’s ability to fight off infections.[7] This infection can be passed from person to person through contact with infected bodily fluids. This includes blood, semen, and vaginal fluids.

Unlike other viruses, the human body cannot fully get rid of HIV. This means that once you have HIV, you have it for life. Fortunately, with proper treatment and medical care, HIV can be monitored and controlled so that those who have the virus can live a happy and healthy life. This requires that they are vigilant about their symptoms and treatments.

Using a condom during any sex act isn’t foolproof, but it can seriously reduce the possibility of contracting or spreading STDs and HIV.[8][9]

Getting tested is the only way to know whether or not you have HIV. The CDC recommends that all adults, from ages 13 to 64, should be screened for the virus.[10] You can order an at-home HIV testing package from myLAB Box. These tests offer lab-certified results that can be checked discreetly online.

There isn’t a cure for HIV; however, getting treatment early can slow the progression of the disease and significantly improve quality of life. A recent study found that people with HIV might have a near-normal life expectancy,[6] as long as they begin treatment before their immune systems are too severely damaged.

Get Tested for HIV Early

If early HIV symptoms in women are present, just like in men, it is a good idea to get tested right away. However, it is important to remember that HIV does not always show signs or symptoms. If you are sexually active, you should be tested regardless. Luckily, there is an easy and convenient way to test from home!  Here’s how it works:

Now you can better recognize early HIV symptoms in women and men. This will better prepare you to identify any problematic health signs you may experience. That said, the best thing you can do for your sexual health is to get tested. It’s the only way to know for sure that you know your status! Don’t stress, just test.

HIV among women . Centers for Disease Control and Prevention July 2018.

Preventing Mother-to-Child Transmission of HIV. National Institutes of Health. May 2018.

About HIV/AIDS. Centers for Disease Control and Prevention. October 2018.

The Antiretroviral Therapy Cohort Collaboration. Survival of HIV-positive patients starting antiretroviral therapy between 1996 and 2013: a collaborative analysis of cohort studies. The Lancet. May 2017.